The Bee Man of Wisconsin, founded by Curt Jepson, actually started as a conversation with his brother, Chris, in 1979. Chris, a beekeeper in central Wisconsin, saw an ad in a beekeeper publication about a pharmaceutical lab needing wasp venom to be used by allergists. After speaking with the labs, Curt learned that they would pay him for as many bald-faced hornets as he could collect. With only a ladder, veil, gloves, pruning shears and a spatula, Curt gained hands-on experience (sometimes the hard way) climbing trees in the dark to remove bald-faced hornet nests. After much trial and error, he perfected his technique.

In 1980, Curt wrote a letter to WTMJ radio host Gordon Hinkley detailing the free service he was offering. Mr. Hinkley had a radio show called “Ask Your Neighbor” in which listeners could call in with a problem and others could call in solutions. Shortly after Curt wrote the letter to Mr. Hinkley, someone called the show with a bald-faced hornet nest in a tree and asked what she should do. Mr. Hinkley read Curt’s letter on the air along with his phone number. The phone started ringing and has never stopped! His callers would initially ask for “the name and number of that guy that takes down those nests.” Eventually, they just started asking for the “Bee Man.” The name stuck!

Curt ran the Bee Man of Wisconsin out of his basement until 1991 when he moved the business to its current location on 127th and Lisbon. He has also added a phone company bucket truck to his nest removal arsenal. One year, in the mid-1980s, Curt found himself without a demand for hornets. Due to a surplus of product, the labs did not need his assistance. However, he continued to receive calls from customers, but had to explain why he couldn’t remove their nest at no charge. His customers started offering to pay for his service and from there he started extermination services of all bees and wasps, not just bald-faced hornet removals. As the business grew, it became necessary to hire employees to handle the high volume of service calls. In 1992, Curt expanded his business to include extermination services of all household pests. He named this branch BMI (Bee Man Incorporated) Pest Control Services. In 2005, he sold BMI Pest Control Services to an employee of the Bee Man. BMI Pest Control Services is currently owned by that employee’s son. 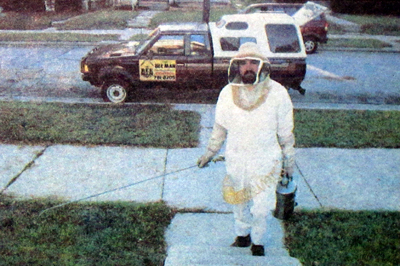 After more than 40 years, The Bee Man of Wisconsin continues to make bee and wasp season a little more bearable for southeast Wisconsin!

The Bee Man takes the sting out of bees and wasps