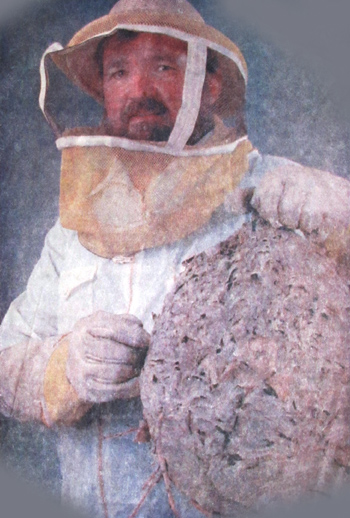 They call him The Bee Man but mostly he hunts a type of yellowjacket, which, in fact, isn’t a hornet at all, but a wasp.

It’s all very confusing, Curt Jepson admits. Most people can’t tell a bee from a wasp. They just know, and know full well, that they want nothing to do with any of these stinging pests.

Not so Jepson, a former Kenoshan, who, for more than a dozen years, has been collecting these fearsome insects for their venom. So every night, at this time of the year, Jepson sets out with flashlight and large paper bags to collect the wasp nests (it’s bees that live in hives) of what are called bald-faced hornets.

Jepson, 50, who now works out of Brookfield, collects these nests throughout southeastern Wisconsin, including Kenosha County, as a seasonal sideline to his fulltime pest control business, The Bee Man, Inc. This season, which began in mid-July and probably will continue into early October, he expects to collect as many as 250 of these nests. Three years ago, he bagged nearly 700 of the paper-like nests, his best season ever. He is under contract to provide the wasps to medical laboratories which use the venom for potentially life-saving medicine for persons acutely allergic to insect stings.

“There are a lot of these nests around. People call me from from Kenosha to Port Washington, to ask me to get rid of them,” Jepson says. “And when I have a contract to deliver insects to a lab, as I do now, I don’t charge at all to collect the nests.”

Jepson, who lived in Kenosha and worked at American Motors until he was drafted during the Vietnam war, began commercially collecting the stinging insects in 1980, at the suggestion of his brother, a fulltime beekeeper.

“He mentioned that he’d seen ads in beekeeping magazines from laboratories who were looking for people who would collect wasps and hornets. It looked like a way to earn some extra money, so I contacted one of the companies and next thing I knew, they sent me a contract.”

Jepson learned as he collected the insect nests, getting his share of painful stings, as many as six at a time. After some years, he quit a fulltime computer systems analyst job, and opened his pest control business, of which the wasp nest collection is a sizeable part.

“I was on radio and TV in Milwaukee and, before long, people got to calling me The Bee Man. Now most of the stinging insects in this area aren’t bees at all, but I finally gave up trying to correct people and just took The Bee Man name for my business.”

In southeastern Wisconsin, he says, there are eight or nine different kinds of yellowjacket wasps, of which the baldfaced hornet is one. Supposedly there are the larger European hornets in this area, but in about 13 years he has collected thousands of nests and has never seen a real hornet.

Because there is so much confusion about the names of those stinging insects that people variously call wasps, hornets and bees, here is a short glossary:

WASPS – The summer scourge of picnics, popularly called yellowjackets, the misnamed “bald-faced hornet” is one of eight or nine wasp types common to this area.

HORNETS – Though the larger European hornet supposedly is a native insect, Curt Jepson has never seen a hornet of any kind here.

BEES – Common in this area, but popularly confused with yellowjackets (which are a wasp).

The so-called baldfaced hornet builds a commonly seen nest, typically about the size and shape of half a football. But Jepson has collected some as large as a bushel basket. They look as though they are made of greyish paper, which, in fact, they are. Wasps chew wood fibre from fences and houses, mixing it with their saliva-like secretions to make a sort of natural papier mache, which is used to form the nest.

It all begins in the spring, with a queen, who mated the previous year and, thus, unlike her companion wasps, is able to hibernate through the winter. She lays a handful of eggs and nurtures the first brood of young. The small nest remains about the size and shape of an egg for more than a month, as the queen devotes full time to further egg-laying.

As new generations hatch and mature, they begin adding to the size of the nest, which then can double in size each week. Wasp workers feed on small insects, gather nectar and tend the swarms of new broods. By mid to late summer, the nest will have grown significantly, and will include anywhere from several hundred to more than a thousand wasps.

This is when Jepson goes to work. With information from wasp-plagued homeowners, which includes exact locations of the discovered nests, he or one of his several assistants sets out by night to capture insects.

“Usually I tell callers that we’ll stop by some night within a week. It might even be 1 or 2 a.m. Maybe they will spot my pickup truck, with the Bee Man name on the door, in the driveway. Or they may see my flashlight beam in their backyard. But most people won’t even know we’ve been there until they see the nest is gone and find the card we’ve left behind.”

Like a repo man repossessing cars, Jepson works quickly and quietly gathering wasp nests from backyards. Occasionally there is an encounter with a curious cop, but, he says, by now, most police departments know of him and his work.

Occasionally he gets stung, despite full protective gear — heavy coveralls, elbow-length leather gloves with elasticized cuffs, a beekeeper’s veil – and he’s been known to bail out of his pickup when he’s heard an angry buzz from in his truck cab from an escapee. But, he says, his biggest worry is that while collecting a nest in a “questionable” neighborhood, a gun-happy neighbor, unaware the reason for his nocturnal visit, may shoot first and ask questions later.

Jepson carefully approaches the nest, since the insects are extremely sensitive to vibration. At the slightest disturbance, they will swarm out to defend their home. So he sprays the nest entrance with carbon dioxide to freeze any wasps that venture out. He then removes the nest and seals it in a large paper bag.

Back in his Brookfield shop, the evening’s collection of nests is popped, bag and all, into chest-type freezers. After 24 hours, the insects are dead. Jepson takes the frozen insects from the nest, sorting them by sex. Females go into plastic bags for shipment, frozen in 10- to 12-pound lots, to venom laboratories in either Pennsylvania or the state of Washington. He is paid by the labs, typically several hundred dollars a pound, depending on supply and demand.

The male wasps have no significant commercial value. Jepson donates the frozen males to the Milwaukee County Zoo or a wildlife refuge, where they are fed to birds.

At the laboratory, Jepson says, workers using tweezers remove stinger and sac containing venom from each of the wasps. Treatment for severely alergic persons, who might otherwise die from the sting of a single wasp, involves receiving repeated small doses of pure venom to build a limited immunity to the poison.

By fall, the number and size of insects in a nest will decrease, ending The Bee Man’s annual “harvest.” In the meantime, he says, he is kept so busy that he needs another assistant in the Kenosha area who he can train to help in nest collecting.

“There probably are only a few dozen of us in the country now,” Jepson says. “There used to be more, but the laboratories found we’ve proved to be reliable and can supply the quantity and quality of insects that they need.”